WRD's Leo J. Vander Lans Advanced Water Treatment Facility (LVL) was built in 2003 and expanded in 2014. This facility can produce up to 8 million gallons per day (mgd) of advanced treated recycled water. LVL is located in the City of Long Beach and provides advanced treated water for injection at the Alamitos Seawater Barrier in Long Beach, playing a vital role in protecting the Central Groundwater Basin from seawater intrusion. In addition, this high-quality water replenishes the groundwater supply.

Prior to LVL and its expansion in 2014, WRD relied totally or partially on imported water to meet the demand at the Alamitos Barrier. Now that LVL can produce 8 million gallons of advanced treated water per day, the Alamitos Barrier is independent of imported water, making it drought-resilient and locally sustainable. The completion of the LVL expansion was a piece of WRD’s Water Independence Now (WIN) program which created a locally sustainable supply for all of WRD’s groundwater replenishment needs.

Groundwater over-pumping in the mid-1900s lowered groundwater levels to below sea level along the coast. This resulted in saltwater flowing into, or “intruding” into the groundwater aquifers. The freshwater once produced by groundwater wells became “brackish,” or too salty for drinking.

In response, LA County constructed seawater barrier injection wells starting in the early 1950s. The wells actively pump freshwater into the ground, thereby creating a water pressure “barrier” to keep seawater out of the aquifers.

Water from LVL is used for freshwater injection at the Los Angeles County Public Works’ Alamitos Barrier Project—a series of injection wells at the southeastern tip of the Central Basin which also crosses over into Orange County. WRD works closely with LA County and the Orange County Water District to ensure that the water demands at the barrier are fulfilled with a sustainable and reliable supply of recycled water.

The Seawater Barriers have been successfully protecting and replenishing the freshwater aquifers in the WRD service area for decades. By using advanced treated recycled water to supply the injection wells, WRD is reducing the strain on imported water resources while strengthening reliability and drought-resilience for the system.

The process begins with microfiltration (MF) which uses filters that are 1/300 the size of a human hair. MF removes suspended matter in the water such as sediments, fine particles, waterborne pathogens, and most bacteria. MF also acts as a pretreatment for the water before it enters the reverse osmosis membranes, thus making the treatment more efficient and extending the lifespan of the reverse osmosis membranes.

The heart of the multi-barrier treatment approach in the advanced water treatment facility is reverse osmosis (RO) where over 99% of dissolved contaminants are removed. This includes organic material, most viruses, pesticides, salt and ions. The thin film RO membranes filter water at the molecular level, removing dissolved solids from the water.

The final process is disinfection through Ultraviolet (UV) Light with Advanced Oxidation. The mixture of hydrogen peroxide with the UV light forms a hydroxyl radical, which is a ‘super-oxidant’ that is nearly twice as powerful as chlorine or hydrogen peroxide by themselves. The hydroxyl radical breaks the chemical bonds of any remaining contaminants. For example, if a virus happens to pass through the RO process, its DNA will be destroyed in the UV process, thus rendering it unable to reproduce or harm humans. This process also removes carcinogens such as N-Nitrosodimethylamine, and industrial additives or chemicals such as 1,4-dioxane, as well as pharmaceuticals and personal care products.

LVL advanced treated water is stringently tested and monitored throughout the treatment process because recycled water is highly regulated.

Watch these great videos from WateReuse on the 3-stage process of advanced water treatment. 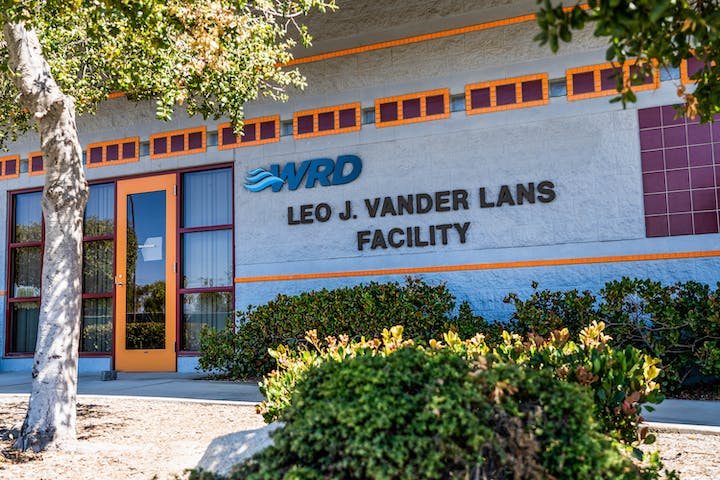